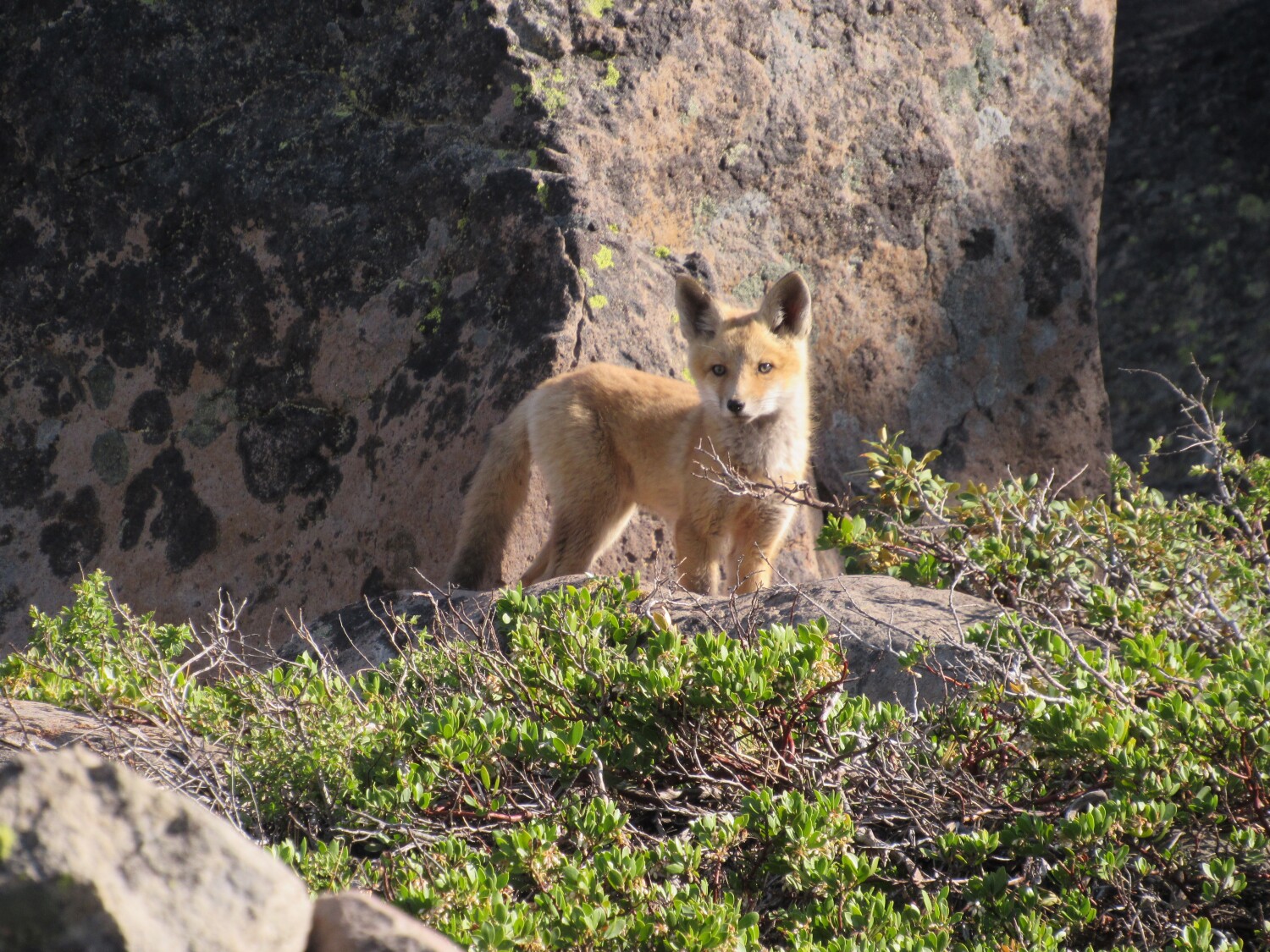 There might be something to the adage “clever as a fox.”

The diminutive foxes, which dwell in the high-elevation reaches of the Sierra Nevada and southern Cascade mountains in California and Oregon, are one of the rarest mammals on the continent. Their population size is unknown but is potentially only in the dozens, with an estimated 18 to 39 spread across the Sonora Pass, northern Yosemite and Mono Creek areas.

California Department of Fish and Wildlife experts think that fewer than 15 of the alpine creatures live in and around Lassen Volcanic National Park and Lassen National Forest, where massive swaths of land were devoured by the nearly 1-million-acre Dixie fire.

In 1980, the animals were designated a threatened species in California, and this summer — as the Dixie fire raged through parts of their territory — a portion of the state’s population won federal protection under the Endangered Species Act.

No strangers to wildfire, the foxes have adapted to seasonal flames. Wildlife experts say they’re typically able to hide or temporarily leave when fires pass through. But with more blazes burning hotter, faster and even into higher elevations in recent years, officials worry the small creatures might not be able to escape the fierce new conflagrations.

“It’s certainly a threat, and it alludes to a larger threat of climate change,” Kaly Adkins, a wildlife biologist with the Oregon Department of Fish and Wildlife, said of the recent intense fires. The mountain-dwelling foxes rely on a certain level of snowpack, which has been dwindling in California’s multiyear drought.

Biologists said a vixen named Tule, who was tending to at least two pups in the remote Caribou Wilderness of Lassen National Forest, was at particular risk from the raging Dixie fire.

Driven by fierce winds, the blaze pushed into the Caribou Wilderness in early August, and the area around Tule’s den burned — as did most of her home range. About 335,750 acres of the Lassen forest was seared by the Dixie blaze, said Pat York, a public information officer with the fire.

When the flames passed through Tule’s habitat, “I was really concerned,” said Jennifer Carlson, an environmental scientist with the California Department of Fish and Wildlife.

But it appeared Tule had outfoxed the fire. A satellite collar on the 3-year-old fox continued to ping.

GPS locations collected by the device showed that Tule traveled north of the fire when flames swept through and then returned to her home base after they passed, said Carlson, who leads the state wildlife department’s efforts to monitor the foxes in the Lassen Peak area.

Carlson says there’s also a good chance her pups survived. If the babies didn’t make it, it’s likely “her movements would have gotten much larger and she would have been using a much larger area,” the biologist said.

Tule is among a group of Sierra Nevada red foxes that state wildlife officials began capturing in 2018 and outfitting with satellite collars. Three other collared females in Lassen Volcanic National Park also appear to have survived the blaze, which charred about two-thirds of the park, Carlson said. Less of their habitat was damaged by the Dixie fire, but they’re continuing to use parts that did burn.

Scientists think all three females gave birth this year but have confirmed only one litter of five pups.

“If the parents survived, there’s a good chance that the pups — most of the pups — survived and did not perish as a result of the Dixie fire,” she said.

But it’s not certain the youngsters made it; wildlife officials have not been able to access most of the burn area to check. Pup survival rates are relatively low, Carlson said, so even if they survived the blaze, there’s no guarantee they’ll make it to adulthood.

“They’re pretty resilient as far as being able to adapt to wildfire,” Carlson said of the foxes. “Now, if we continue to have catastrophic wildfires like this, that might be another story.

“If it continues to happen every year … to where there’s no habitat left, then we’ll have a problem,” she added.

Despite their name, the foxes aren’t always red. Some are black, and others are a tawny brown. Dense fur grows on the bottom of their feet, allowing them to trek across deep snowpack “almost like snowshoes,” Adkins said. Dwelling at elevations as high as 10,000 feet in the summer and 5,000 feet in the winter, they are active year-round, feeding on small mammals and sometimes insects and berries.

When the U.S. Fish and Wildlife Service listed the foxes as endangered this year, protections were extended only to the Sierra Nevada population, ranging from south of Lake Tahoe to south of Yosemite National Park. It doesn’t include the Cascade Range that encompasses the foxes in Lassen Peak and those farther north in Oregon.

In its determination, the government noted the California segment’s low numbers made them “more susceptible to deleterious stochastic events” — harmful and random — “such as major fires or diseases.” Loss of just a few would wipe out a relatively large proportion of the entire population, officials said.

“We think they should have been listed as a species, rather than just that one population,” Greenwald said. The center, a nonprofit membership organization dedicated to protecting endangered species, is fighting for federal safeguards for the fox population in the Cascades as well.

Fires are just one of many threats facing the rare animals.

Isolated on remote mountaintops, the minuscule populations are imperiled by inbreeding and hybridization with nonnative foxes. Coyotes compete for their living space and food. People are increasingly recreating on their turf. And there’s the ever-looming threat of climate change, which has the potential to shrink their habitat.