House to censure Gosar over cartoon showing him stab AOC 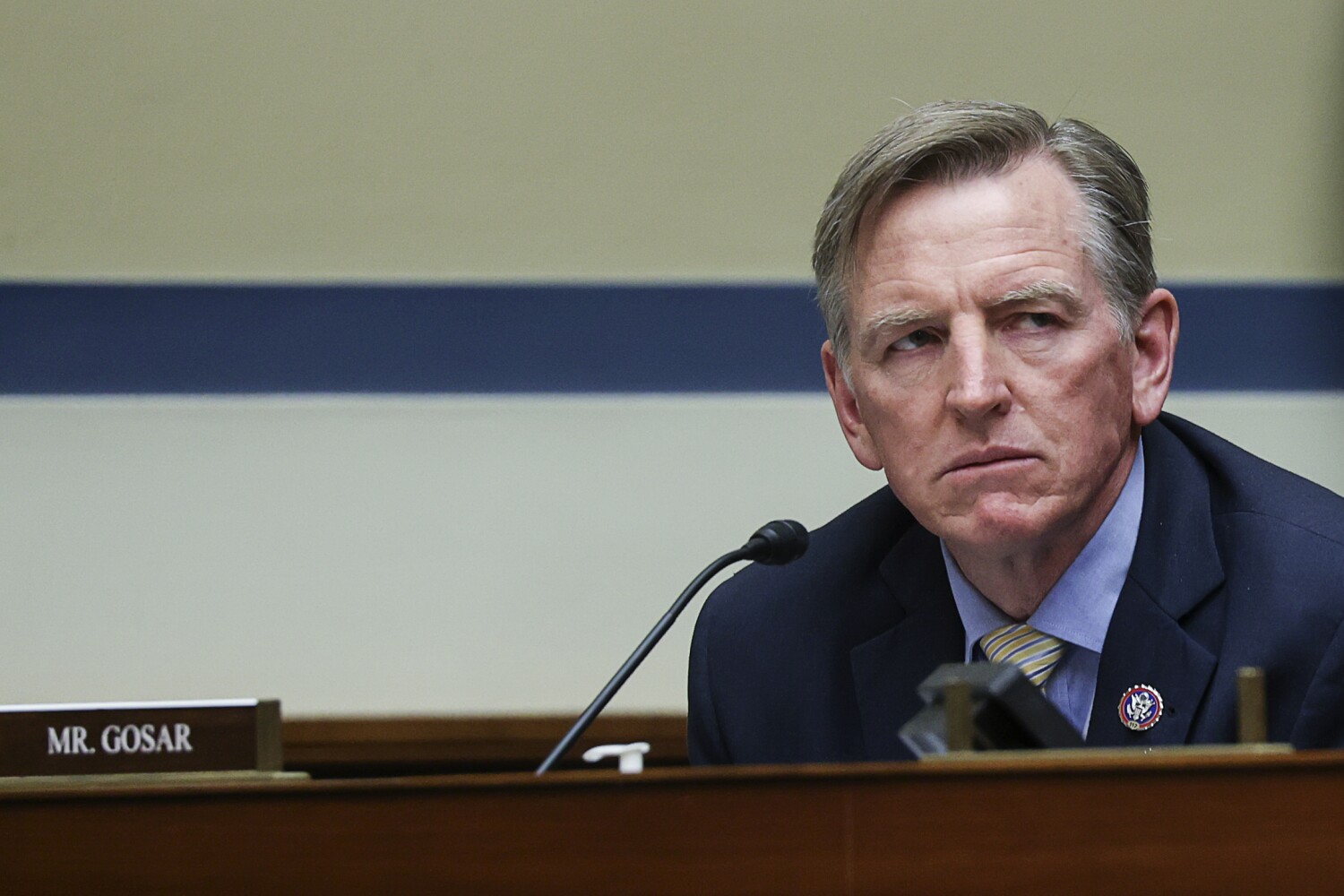 House Democrats are planning to vote Wednesday to censure and strip of committee assignments a Republican member of Congress who shared a violent animated video of himself killing a Democratic colleague.

Rep. Paul Gosar (R-Ariz.) is set to become the first member to be censured by the House in more than 10 years and the second Republican to be stripped of committee assignments this year.

The likely action comes 10 days after the Arizona Republican posted, and later deleted, a cartoon video with his face superimposed on a character who kills someone with Rep. Alexandria Ocasio-Cortez’s face and wields swords against President Biden.

A censure is a public rebuke of a member’s misconduct. The action is more severe than a reprimand but not as serious as expulsion. A censure resolution is approved by a majority vote and requires the censured member to stand in the well of the House as Speaker Nancy Pelosi (D-San Francisco) or the presiding officer of the chamber reads the resolution aloud.

Gosar serves on two panels, the Oversight and Reform Committee and the Natural Resources Committee. Ocasio-Cortez (D-N.Y.) is also a member of the Oversight Committee and has spent more than $73,000 this year on security services through September, according to campaign filings.

“It’s been well over a week,” Ocasio-Cortez told reporters Tuesday. “He not only has not apologized, he not only has not made any sort of contact or outreach — he nor the Republican leader, [House Minority Leader Kevin ] McCarthy. But he has also doubled down by saying that I am somehow representative of undocumented people.”

“I heard a lot of things from Congressman Gosar since the video was posted, but one thing I haven’t heard was, ‘I’m sorry, and I did something that truly was wrong and awful and reprehensible,’” McGovern added.

He also criticized McCarthy (R-Bakersfield) for his “public silence and inaction,” lamenting that a “stern private call here is not going to cut it.”

House Democrats — and 11 Republicans — voted to remove Rep. Marjorie Taylor Greene (R-Ga.) from her committee assignments in February over racist rhetoric and support of violence against Democrats.

In both cases, McCarthy was criticized for failing take a firm stance against misconduct by one of his members. Hoping to become speaker in 2023 if Republicans win the House, McCarthy has long struggled to win the confidence of the party’s right-flank and has often refrained from actions that might further alienate them.

Republicans also warned that Democrats’ second action against a GOP member could come back to haunt them if Republicans regain control of the House next November and decide to take similar steps against Democrats.

Rep. Tom Cole (R-Okla.), the top Republican on the Rules Committee, conceded at Tuesday’s hearing that Gosar’s video was “certainly provocative,” but argued that Gosar pulled the clip after McCarthy reached out, released a public statement and told his colleagues at a conference meeting Tuesday morning that he doesn’t condone or endorse violence.

“As far as I’m concerned, I think that should’ve been the end of the matter,” Cole said.

Each party traditionally controls their members’ committee assignments. Republicans have accused Democrats of hypocrisy for moving to punish Republican members while refusing to take similar action against members of their own caucus who have been accused of anti-Semitism or promoting violence.

Cole said Democrats should have let McCarthy and House Republicans settle this issue themselves or refer Gosar to the Ethics Committee, a bipartisan panel that would’ve reviewed the incident and given Gosar an opportunity to state his case before the committee made a recommendation.

More than two dozen Democrats signed a letter to McCarthy last week asking the GOP leader to publicly request an Ethics Committee investigation into Gosar’s conduct. A spokesperson for Rep. Sheila Jackson Lee (D-Texas), who spearheaded the letter, said she had not heard back from McCarthy as of late Tuesday night.

A day after Gosar published the clip online, he posted a meme that said: “It’s a cartoon. Relax.”

Gosar said he explained the video to his Republican colleagues Tuesday morning but did not apologize. He told the “Stew Peters Show” that the clip was an attempt to reach younger voters with a message on illegal immigration.