It was 1929 and the race was on to put up the tallest building in the world. Less than two years later, it was over. The age of skyscrapers had its exclamation point.
From demolition through construction, author Elizabeth Mann tracks the architecture and engineering. From millionaires to laborers, she captures the human stories. From the rise of a city to the depths of the Great Depression, she traces the forces behind the creation of the world's most famous skyscraper
Empire State Building is fascinating look at an American icon. Honor Book—National Council of Teachers of English. "A top choice...Mann's exploration of this New York City icon will capture the imagination."—School Library Journal 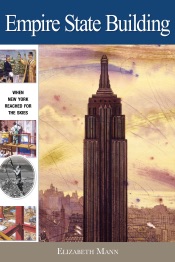