Treasure Island gave birth to almost all of the images that flash to mind at the sound of the word "pirates." It is the archetype of its genre, and one of the most celebrated adventure novels ever written.

Jim Hawkins, the son of an innkeeper, unwittingly finds himself caught between feuding pirates when a man named Billy Bones wanders into his inn. After narrowly escaping a raid by Bones' old crewmates, Jim finds himself in possession of a map and a logbook detailing the location of all the treasure taken by the pirates' departed Captain Flint. Jim reports his discovery, and before long is aboard the schooner Hispaniola with a crew bound for the Caribbean. While aboard the ship, Jim befriends the cook: a gruff, one-legged tavern owner by the name of Long John Silver, who may be much more than he appears. 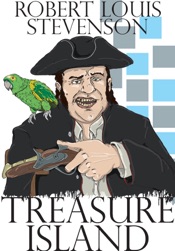