We're delighted to introduce the Swiss bestseller about Roger Federer in English, brought to you by k&b Edition. It was written by Simon Graf and translated into English from the original German by Sophie Debrunner Hall. Over its 16 essays, Simon Graf's new portrait offers new insights into one of the greatest athletes of all time.

Roger Federer is the global star who emerged from our very midst. Mad about ball sports from a young age, his playfulness and passion pushed him fur-ther and further – and on to dizzying heights. His sporting exploits are well-known, but who is the man behind them? For the last twenty years, Zurich-based journalist Simon Graf has fol-lowed Federer's triumphant journey through the great tennis arenas of the world for the Swiss press. Here, he an-swers the key questions: how did Federer become a Zen master of the courts? What part did his parents and his wife Mirka have to play? How did he maintain his love for the sport over all these years? Why does he owe eternal thanks to his rival, Rafael Nadal? How did he stay so normal? And what can we learn from him? 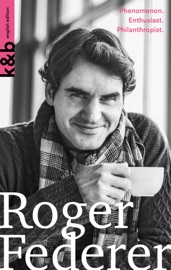