The third book in the series following on from the American classic The House With a Clock in Its Walls, now a major motion picture from Steven Spielberg's Amblin Entertainment, starring Cate Blanchett, Jack Black and Kyle MacLachlan

Rose Rita wishes she could go to camp like her best friend, Lewis. She's sure that boys get to have all the fun, but instead she must stay at home and get ready to attend Junior High, where she will have to do 'girly' activities - something she hates! That is until Mrs Zimmermann offers her an adventure of her own - a trip to cousin Oley's farm.

Mrs Zimmermann's cousin Oley has left her his farm, as well as a ring that he thinks is magic. But when Mrs Zimmermann and Rose Rita arrive at the deserted farm, the ring has mysteriously vanished. Strange things start to happen around them - Mrs Zimmermann becomes ill, Rose Rita keeps on seeing scary images and Mrs Zimmermann goes missing.

What power does this magical ring have? Will the person who took the ring use it to do evil? And will Rose Rita be able to rescue Mrs Zimmermann from whatever evil force that has taken her? 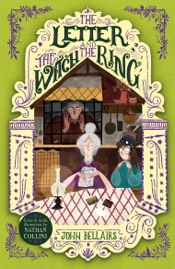