Author’s Note: The stories in the Regency Unlaced, Alpha, and Knight Security Series, have stronger sexual content and language than my other books.

Desired by a Lord is the story of a case of mistaken identity, hidden secrets, and desire that rages out of control every time the hero and heroine are alone together. All of which threatens to throw the two of them into a maelstrom of scandal.

Mrs. Emily Marsden has lived in quiet obscurity in the country for the past five years, well away from Society and the scandal which broke her family apart. All of that changes with the death of Edmund, her historian husband, requiring that she now seek employment. Easier said than done, and not helped by the fact there is a blackmailer threatening to expose her if she does not give into their demands.

Lord Alexander Whitney dislikes country life, but unfortunately he has no choice but to remain in Yorkshire for the foreseeable future. The Whitney estate, left to him by his father, is desperately in need of repair, and the famous Whitney Library, in need of cataloguing and returning to order.

Xander is dealing with the run-down estate, and engaging the noted historian, Edmund Marsden, seems to be the logical thing to do in regard to restoring the library.

When it is Mrs. Emily Marsden who arrives to carry out the task, Xander is not at all pleased to realize he has been duped.

Or that he feels so strongly attracted to the young and mysterious widow he cannot seem to keep his hands, or other parts of his anatomy, from wanting her to touch and claim her.

Can two people, who seem to be such opposites, find more in common than their desire for each other, and in doing so save Emily from the blackmailer threatening her future?

Carole Mortimer has written over 210 books, in contemporary and Regency romance, and is the Recipient of the prestigious 2015 Romance Writers of America’s Lifetime Achievement Award. She is an Entertainment Weekly Top 10 Romance Author—ever. 2014 Romantic Times Pioneer of Romance author. Was recognized by Queen Elizabeth II in 2012, for her “outstanding service to literature”. 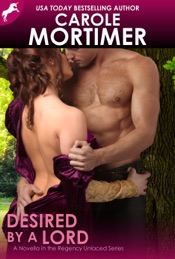