In the first book from popular Golf Channel analyst Brandel Chamblee, the network’s “resident scholar and critic” (The New York Times) explores the common swing positions of the greatest players throughout history—and reveals how those commonalities can help players of every skill level improve their own games.

Every golf game begins with the swing. While no two are identical, Brandel Chamblee, the highly regarded television analyst and former PGA Tour professional, once noticed that the best players of all time have shared similar positions in each part of the swing, from the grip and setup to the footwork, backswing, and follow-through. Since then, Chamblee, a student of the game’s history, has used scientific precision and thoroughness to make a study of the common swing positions of the greats. Now, in The Anatomy of Greatness, he shares what he has learned, offering hundreds of photographs as proof, to show us how we can easily incorporate his findings into our own swings to hit the ball farther, straighter, and more consistently.

What does it tell us that the majority of the greats—from Jack Nicklaus and Byron Nelson to modern masters like Tiger Woods—employ a “strong” grip on the club? How did legends like Ben Hogan, Sam Snead, Mickey Wright, and Gary Player unlock hidden power and control by turning in the right knee at address? Why are some modern teachers preaching quiet footwork when forty-eight of the top fifty golfers of all time lifted their left heels on the backswing, allowing them to build power? At the same time that Chamblee is encouraging certain swing virtues, he also debunks a number of popular—but misguided—swing philosophies that have been hindering golfers for years.

The result is perhaps the best and clearest explanation of how to hit a golf ball ever published. Golfers can take The Anatomy of Greatness to the driving range and use Chamblee’s clear explanations to build better swings—and get more speed and consistency into their swings—immediately. This book is like having a series of private lessons from the best golfers of all time, and it will help golfers build swings that make the game easier and more fun. 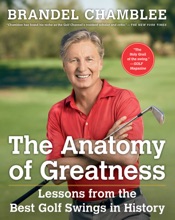