Callum Robinson ended a week of controversy with a decisive double as the Republic of Ireland won a competitive match for the first time under manager Stephen Kenny in Azerbaijan.

Robinson hit the headlines in the run-up to the game after revealing he had chosen not to be vaccinated against Covid-19 despite twice contracting the virus, but provided the perfect response to the criticism he received as a result with two first-half goals to set the stage for a 3-0 World Cup qualifying win in Baku.

The success at the Baki Olimpiya Stadium, which was rounded off by substitute Chiedozie Ogbene’s late header, was Ireland’s first in a meaningful fixture since they beat Gibraltar 2-0 in June 2019, some 16 attempts ago, and belatedly launched their Group A campaign after three defeats and two draws.

Kenny’s men had to endure an uncomfortable spell between Robinson’s goals as the hosts rallied, but might have won even more comfortably as the game opened up after the break.

Beating FIFA’s 117th-ranked team, who drew in Dublin last month, may not represent a major achievement in the grand scheme of things, but it will serve to ease some of the pressure on a manager who had tasted victory only once in his first 16 fixtures in charge.

Ireland started confidently and capitalised on their early dominance as wing-back James McClean slid the ball into Robinson’s path and he controlled it with his right foot before dispatching it high past keeper Shakhrudin Magomedaliyev’s outstretched hand with an imperious swish of his left.

Republic keeper Gavin Bazunu had to make a smart save from Namik Alaskarov’s 10th-minute snapshot and then saw defender Hojjat Haghverdi head over from Abbas Huseynov’s 13th-minute cross as the hosts responded in concerted fashion.

Striker Filip Ozobic chanced his arm from distance as the first half approached its mid-point, but could not trouble Bazunu, something he did from a similar range minutes later with Azerbaijan having recovered impressively from a disappointing start. 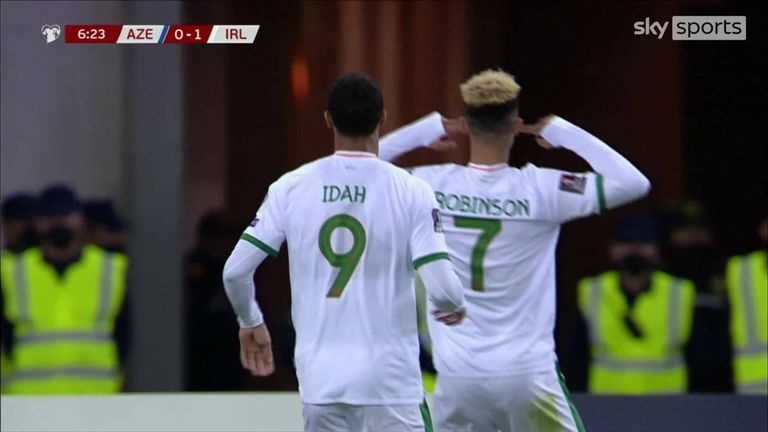 Callum Robinson with the first proper effort on goal, fires the Republic of Ireland in front with a wonderful strike

Josh Cullen and Jeff Hendrick were seeing too little of the ball in the middle of the field to change the flow of the game, although Robinson came close to a spectacular second after meeting Adam Idah’s 31st-minute cross with a firm volley after the Norwich frontman had exchanged passes with Matt Doherty wide on the right.

Azeri dangerman Mahir Emreli drilled another attempt from distance high and wide in the search for an equaliser with Ireland’s repeated carelessness in possession doing them few favours, but they eased their nerves six minutes before the break.

Robinson’s movement had proved a constant thorn in the Azeris’ side and after he found space on the edge of the penalty area once again, he cut inside onto his right foot and saw his shot clip Haghverdi and arc past the helpless Magomedaliyev and into the bottom corner. 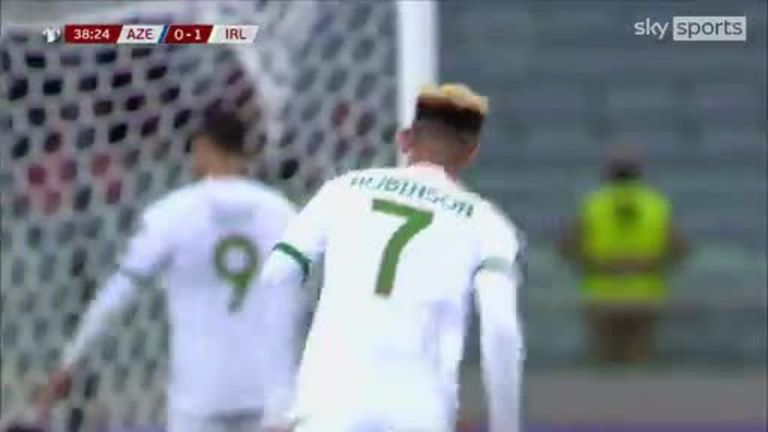 Haghverdi had to come to Azerbaijan’s rescue at the other end when he threw himself into the path of McClean’s strike after he had exchanged passes with Robinson and embarked on a barnstorming run towards goal four minutes into the second half.

Robinson fired into the side-netting from a tight angle after Idah had passed unselfishly and defender Shane Duffy headed just wide from the West Brom frontman’s cross with the Republic threatening to kill off the game as a contest.

Magomedaliyev denied Robinson a hat-trick with a vital 58th-minute save after Doherty had played him in, and the striker headed over from Doherty’s cross six minutes later with the points seemingly there for the taking. 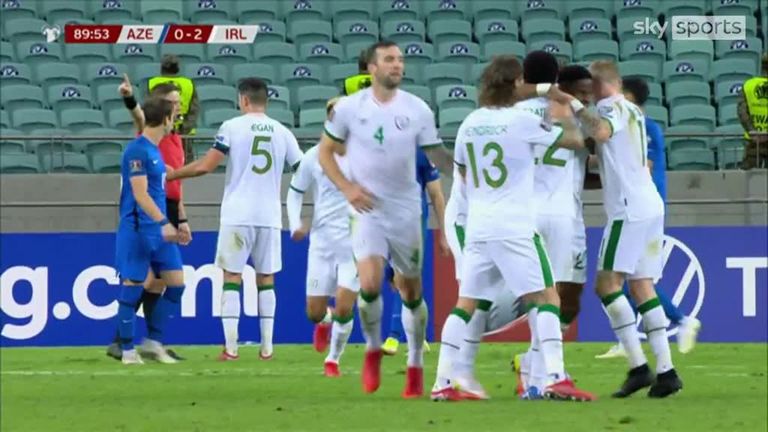 Bazunu had to help a raking Huseynov strike over his crossbar and pulled off a fine save to turn Gara Garayev’s piledriver onto the woodwork with 10 minutes remaining to stave off a tense conclusion.

Neither Duffy nor Robinson could make the most of late opportunities to cement the win, but Ogbene duly obliged in the final minute of normal time with a firm header from Cullen’s corner, the first time the Republic had scored three times in a competitive game since doing so in Moldova five years ago to the day.

Robinson: I could’ve had perfect hat-trick

Robinson rued missed opportunities to complete a hat-trick, but was delighted with the win.

He told Sky Sports: “That one’s going to hurt for a while, that I didn’t get the hat-trick in the end.

“But I’m happy first of all to get the win – that was the main thing. Goals come second, but it was obviously nice to get on the scoresheet as well.

“But the main thing is that we’re on the plane on the way home with a big ‘W’.”

Republic of Ireland are next in action in a friendly with Qatar on Tuesday, live on Sky Sports Premier League from 7.35pm; kick-off 7.45pm.