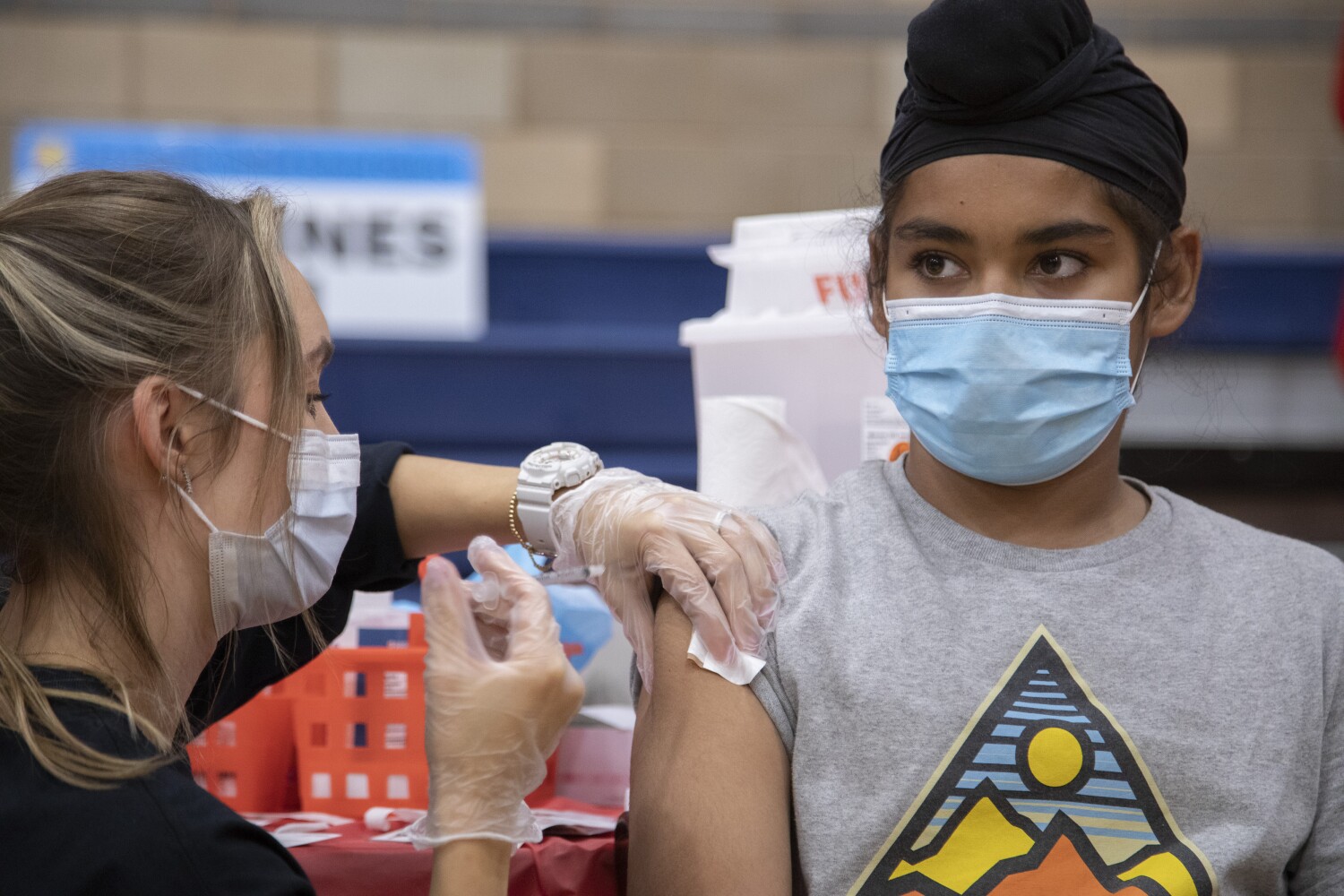 About 34,000 students have not yet complied with the COVID-19 vaccine mandate in the Los Angeles Unified School District — and there’s no longer enough time for students who have not gotten their first shot to be fully vaccinated by the Jan. 10 start of the second semester, portending significant disruption to their education as they will be barred from campus.

The high number of students who will not be able to meet the full inoculation deadline is likely to force difficult decisions on leaders of the nation’s second-largest school system, which has enacted among the strictest vaccine mandates in the nation. Students who are not fully vaccinated — or exempt — will be forced into the district’s independent study program or will have to leave the Los Angeles public school system.

Shifting 34,000 students 12 and older into independent study would be challenging —especially as the district’s independent study program, called City of Angels, has been beset by staffing shortages and confusion after it was inundated at the start of the school year with about 10,000 students, a number that grew to 16,000. The 34,000 total by itself would make up one of the 25 largest school systems in California.

There’s no indication that L.A. Unified is backing down — with no leniency or extended deadlines under public discussion.

“Our schools have some of the strongest safety standards in the nation and we plan on keeping it that way,” interim Supt. Megan Reilly said in a video broadcast during Tuesday’s school board meeting. Despite the determined statement, the video message was mostly a soft-sell, with smiling students urging their peers to be vaccinated “like me,” as they said, one after another.

The L.A. school system is one of the few in the nation with a student vaccine mandate — and also among a small number with an employee vaccine mandate. The employee mandate has already taken effect, with relatively modest disruption, because an overwhelming majority of workers complied. Employees could request an exemption for personal beliefs; students will not have that option.

The compliance rate, so far, of nearly 85% for students has improved since Nov. 22 when it was 80% and about 44,000 students were not on track. The district has waged an intense public-awareness campaign and there is widespread availability of vaccines on campus. About 450,000 pre-kindergarten through 12th-grade students are enrolled in L.A. Unified.

“We have to give credit to the district for taking on the vaccination mandate and embracing the challenges that came with offering vaccinations at schools,” said Ana Ponce, executive director of Great Public Schools Now, a locally based advocacy group. “And I think we need to be fair and not hold the district completely accountable for vaccine hesitancy.”

Principals and other administrators posed that same question after a district presentation Monday night to their union, Associated Administrators of Los Angeles. What will happen after an exodus of students move to an online setting? How many teachers would have to follow them? Would campus classes and schedules have to be reshaped over night?

“Do we have a hard deadline as to when we’re going to get answers on this?” an administrator asked senior district managers. “When are we going to know, respectfully?”

The answer was: Maybe by Friday.

“It would be a significant equity issue for thousands of students to be forced back into the distance learning that has already been proven to be a failure,” said Sharon McKeeman, founder of Let Them Choose, a San Diego County-based group that is spearheading litigation against student COVID vaccine mandates. “Even after asserting both pressure and rewards, LAUSD does not seem to be on track to meet its accelerated vaccination deadline.”

Parents and students opposed to the mandate have called in to every recent school board meeting — pleading their cause, threatening litigation. But a quieter pro-vaccine majority might be just as upset to see the district back down from its deadline.

The teachers union wants the district to hold firm.

“It is simply the right thing to do,” union Vice President Juan Ramirez told the school board on Tuesday. “It is the responsible thing to do.”

He added that the mandate should be extended to privately operated, district-authorized charter schools, which serve about one in five L.A. Unified students. Charters have to abide by the student mandate only when they operate on a district campus shared with a district school.

It is unclear how much higher the student compliance numbers will grow.

It could be that many families have simply not yet uploaded documentation. When that happens, thousands more students could be on track. On the other hand, the current student compliance rate of nearly 85% is based on students who have received at least one shot. Many students will need to follow through and get a second shot on a timely basis to remain on track.

Students are considered in compliance if they get the vaccine, receive a medical exemption or obtain a rare deadline extension based on extenuating circumstances.

As the district braces for a surge of independent-study students, one source for needed teachers would be those who declined to comply with the district’s employee vaccine mandate. The district has held onto 808 instructors “with a qualifying medical condition or sincerely held religious belief eligible for reasonable accommodation,” as the district puts it. The district has not yet terminated any teachers for refusing to get vaccinated. Employees in other jobs or members of other unions have not been so lucky. The district on Tuesday said that close to 500 employees — out of about 73,000 — have lost their jobs.

Already, about 515 of the unvaccinated teachers have been transferred to City of Angels to oversee the 16,000 students currently enrolled.

The Pfizer-BioNTech vaccine is the only one available to students 12 and older. The second shot is not administered until at least three weeks after the first. Maximum immunity is achieved about two weeks after the second shot — a five-week timeframe. Students who are 18 or older have the option of taking the one-dose Johnson & Johnson vaccine, followed by a two-week period to achieve maximum immunity.

L.A. Unified also is offering vaccines to students 5 and older, but not mandating them.